On July 22 1916, Wedgwood consecrated Leadbeater to the episcopate at “Crendon”, Milson Road, Neutral Bay, an inner suburb of Sydney, the home of Mr and Mrs Gustav Kollerstrom, eminent Theosophists.

The Roman Pontifical in an English translation as found in The Old Catholic Missal and Ritual: prepared for the use of English-speaking congregations of Old Catholic, in communion with the ancient Catholic Archiepiscopal See of Utrecht was used. It had been compiled by Archbishop Arnold Harris Mathew of the Old Catholic Church in Great Britain and was published with the approval of Gerardus Gul, Archbishop of Utrecht, by Cope and Fenwick, London, in 1909. A digitalized version of this volume is available on-line at: https://archive.org/details/oldcatholicmiss00unknuoft

Leadbeater had been baptized, confirmed, ordained a Deacon and a Priest in the Church of England, but because the Roman Catholic Church (and, at that time, the Old Catholic Church) did not recognize the validity of Anglican sacraments, Wedgwood first administered the sacraments of Baptism and Confirmation to Leadbeater, then admitted him to the Minor Orders (which do not exist in the Church of England), and then ordained him Deacon and Priest on July 15 1916, all rites according to The Old Catholic Missal and Ritual. These ceremonies were carried out at “Nandina”, Undercliff Street, Neutral Bay, an inner suburb of Sydney, the home of the Jonkheer Julian Mazel. 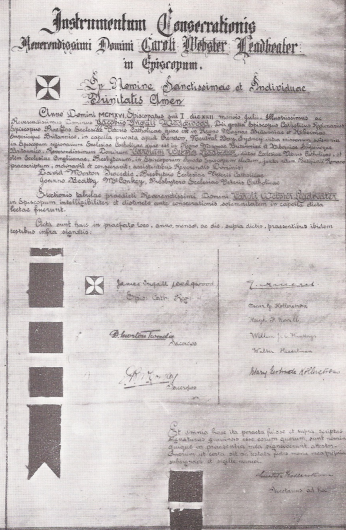 As can be seen from the Instrumentum Consecrationis (“Instrument of Consecration”), Wedgwood was assisted by two priests whom he had recently ordained, David Morton Tweedie of Adelaide, and John Beatty McConkey of Melbourne.  The witnesses who signed the Instrumentum included the two priests; Gustav Kollerstom (as “Secretarius ad hoc”); Mary Gertrude Kollerstrom; and four of Leadbeater’s current boy pupils. The boys were Oscar Kollerstrom (13 years of age, son of Gustav and Mary Kollerstrom); Hugh Noall (14); William Heyting )13); and Walter Hesselman (13). Obviously, as “infants” for the purposes of civil law, they would have been ineligible at act as witness to legal documents.

Given that the consecration was (initially) intended to be kept secret, and was undertaken in a private residence, the small number of witnesses is not surprising. It is unknown whether any photographs of the event were taken, or exist.

The copy of the Instrumentum is taken from A.W. Cockerham The Apostolic Succession in the Liberal Catholic Church The St Alban Press, Sydney, 1966.